2021 was quite a year for sure. As we reach the end of it, it’s a good time to stop and reflect on the past year and all it brought us. It’s safe to say nobody quite expected everything, but sometimes the unexpected is what’s to be expected. What can always be expected every year? Of course, a bunch of great cigars coming out from the top brands in the industry. So that being said, here is our countdown of the top ten cigars of 2021!

Starting at the back end of the list to build up a little suspense! We are going to be starting with cigars 10, 9, and 8. Crowned Heads makes some great limited edition smokes. This one might just be the cream of the crop from them. The La Careme line has always featured a box-press in years past. This year they changed it up a little bit by going with a round shape. Beyond that, this 5 ½ x 52 belicoso features the same blend as before. A Connecticut broadleaf wrapper, Ecuadorian Sumatra binder, and fillers from Nicaragua. This cigar was a limited run from the Black Label Trading Co. for the folks in Hawaii at R. Field Wine Co. This is a unique looking cigar featuring a dark Ecuadorian Maduro wrapper with green candela highlights. It’s also got Nicaraguan habano binder and Nicaraguan fillers. This being an island exclusive cigar, it definitely gives off big island vibes. The original Viaje Honey & Hand Grenades cigar is a classic, and when it comes to classics, it’s always hard to improve upon them. So what did Viaje do? They wrapped it in an exquisite San Andres Maduro wrapper. These cigars feature a parejo cap with a figurado foot, making it ann unique shape. This cigar came in three vitolas. Well, we recommend the biggest. The 6 ½ x 44 rapier because you are going to want to spend as much time with this smoke as possible.

We’ve already gone over some great cigars, but as we move further into the list, the selections just keep getting better and better. 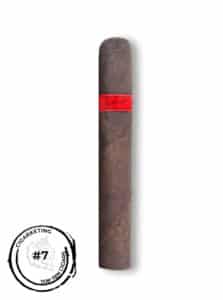 Every year, Tatuaje releases a new addition to their monster series. The cigars in this series are named after a different monster from film, literature, or folklore. This year, they put out a 14 cigar sampler called the Monster Mash. It is featuring a slightly shorter version of every monster cigar they’ve released over the years. Our #7 pick on this list is a throwback to what was originally made in 2014. But then, it rose from the dead in 2021: Jason. Jason features a beautiful Connecticut broadleaf wrapper with Nicaraguan binders and fillers. This spooky smoke is definitely one to keep an eye out for if you can find it. The Supreme Leaf Corona Gorda from Aganorsa is a lovely Nicaraguan puro. The flavors on this cigar are classic Aganorsa, featuring earthiness, dark chocolate, and a bit of pepper spice. It also got a pretty extreme box press that really accentuates the four different sides of the cigar and a closed foot. The corona Gorda size comes in at 6 x 46, and even at its somewhat thinner gauge, it still has quite a textured feel to the wrapper. The Bishop’s Blend is anything but holy. This cigar features its signature black and red skull and crossbones on the band, and the flavor it brings is just as extreme as the presentation. This smoke is not for the faint of heart, but if you love cigars that are full-bodied and spicy, this one is perfect for you. The corona largo size comes in at 6 ¼ x 46 and uses an Ecuadorian Habano Maduro wrapper over Ecuadorian Habano binder, and Nicaraguan and Pennsylvania grown Connecticut broadleaf fillers.

Well into the second half of the list and has already broken into the top five, we are nearing the final countdown to our number one cigar of the year. But first, we need to go over the best of the rest. 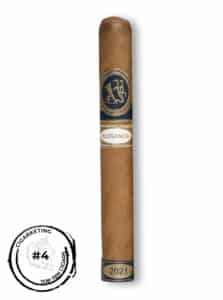 Michael Herklots and Brendan Scott purchased the old Nat Sherman portfolio, and their first release under their new brand Ferio Tego is the Ferio Tego Elegancia. Their current plan is to keep all of the old brand names in production, and keep them in production at the same factories they are at, and distribute through Davidoff of Geneva. The first release they did was with the Ferio Tego Elegancia, with plans to roll out some older brand names in the near future. The Elegancia features a creamy Ecuadorian wrapper, Dominican binder, and Dominican and Nicaraguan binder. It comes in a 6 x 50 toro and is easily one of the best mild cigars of the year. As the name suggests, this cigar came with an unfinished foot, allowing for the flavors to change distinctly in the first third of the cigar when the wrapper starts to burn a little after the binder and filler. It was one of the exclusives featured in the Cigar Rights of America sampler pack, with proceeds from those packs going to help defend your right to smoke cigars. The Davidoff Exclusive series offers a number of different shops a chance to select their own custom blend reflecting the taste preferences of their local region. The Palmyra was selected to be exclusive of the Cigar Warehouse in California. The amazing quality that comes from Davidoff cigars certainly comes through with this one, and it is well-deserving of its runner-up spot on our list.

Smoking the Number One Cigar of 2021

We are down to the top spot, it’s the moment we have all been waiting for. It is time to announce our #1 cigar of the year. 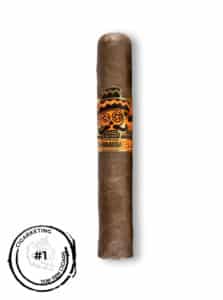 The Cigarketing #1 Cigar of the Year title goes to Noel Rojas for the Street Tacos Barbacoa Robusto. This cigar is the first in the Street Tacos lineup, with a name representing old-school methods of cooking meats. In fact, barbacoa is the origin of the word barbeque. With a name like that, how can it not be good? This amazing smoke features an Ecuadorian Sumatra wrapper with Nicaraguan binder and filler. This is most deserving of the top spot, so make sure to get your hands on one to try for yourself.

This list of the top ten cigars of the year is great! These are some phenomenal smokes to keep in your shop that will separate you from the competition. In addition to bringing these great cigars into your shop, you can also bring in Cigarketing to help with your marketing and social media presence. We are cigar people who excel at helping cigar shops get their name out there and truly succeed. Contact Cigarketing today to talk to some members of our team, and learn more about how we can help your shop grow.


Cigar Marketing: 9 Things You Should You Say in Your Email Campaigns


Marketing to the Next Generation of Cigar Aficionados


Bringing Cigars Back: The Art of Craft Tobacco